Here we look at how we were able to achieve 5 million writes per second & 60 million reads per second with only 20 GridDB nodes on Google Cloud.

GridDB is a super fast database for IoT and Big Data applications developed by Toshiba Digital Solutions Corporation. It has a unique key-container data model that is ideal for storing sensor data, a â€œmemory first, storage secondâ€ architecture that provides incredible performance, and it easily scales out to up to 1,000 nodes.

For use of GridDB in the cloud, please take a look at the GridDB Cloud Website

Several databases have published reports over the last few years, including Cassandra, Aerospike, and Couchbase in which they share that were able to sustain one million writes-per-second running on public cloud services. We (Fixstars) and the GridDB team took that as a challenge and decided to see how much further we could scale GridDB and drive down the performance-per-dollar.

Google Cloud Platform was used to run the benchmark. We used the default, boot-persistent n1-standard-8 instance types with a 375GB SSD each and with n1-standard-8 instances eight vCPUs and 30GB of memory published per instance pricing was 0.042/hour. A 1:1 ratio of server and client instances were used: for example, for 3 servers, 3 clients were used and for 5 servers, 5 clients were used and so on.

From prior experience, we knew that the sorts of GridDB workloads that we had planned would be I/O bound and that GCPâ€™s SSD offered the best performance value ratio. The fast storage combined with GCPâ€™s Jupiter networking fabric that offers faster 16 gigabit network egress means that GCP is an ideal platform for GridDB allowing us to achieve near linear scalability from three to twenty server instances.

A new benchmark client was written in Java with maximum performance in mind. The client would read or write to one container per thread per process eliminating any lock contention.

Like the other databases who have published â€œ1 Million Writesâ€ successes, each record was 200 bytes and 100M records were inserted and read for each trial.

GridDBâ€™s configuration was changed from the default parameters with the following settings:

With just 3 Google Cloud nodes, GridDB was close to completing 1 million writes per second with 897,718 operations per second. Performance was able to scale linearly as servers were added, with 20 servers being able to achieve our goal of 5 million writes-per-second. 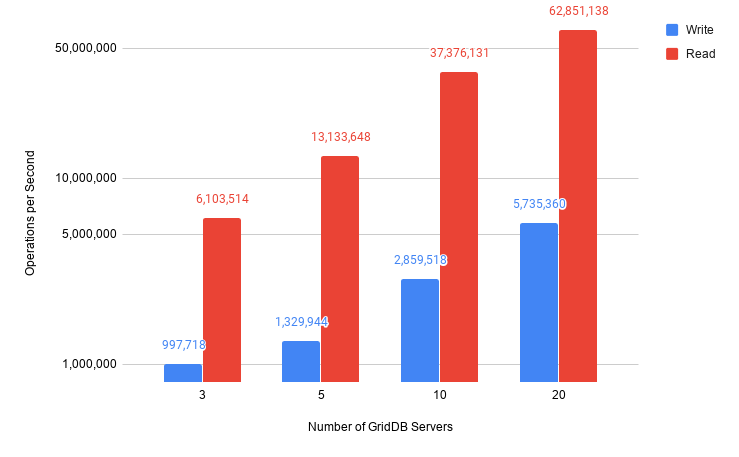 Each GridDB server was able to perform at least 250,000 writes per second and read at least 2 million records per second. This consistent performance makes GridDB ideal for applications where data is ingested continuously at high volumes such as Industry 4.0, financial markets, and both Consumer and Industrial IoT.

Like YCSB, our benchmark tool doesnâ€™t directly measure latency, instead it calculates median latency per host using the formula latency = 1 / operations per second, which is the average time each operation takes. Low latency is imperative for real-time analytics, monitoring, and visualization applications where having the most recent data available ensures that optimal business decisions are made.

A single server used for these tests costs $0.42 per hour. A small budget of only $1,500 per month is required to achieve 1M writes per second and scale to $6,000 per month for 5M writes per second meaning better cost efficiency with larger workloads. Absolute costs per 100M reads or writes provide longevity as costs per user or device do not escalate as your business grows.

These results show the cost effectiveness of GridDB on Google Cloud, requiring significantly less computational and storage resources than other databases.