Most websites make their data available to users via APIs. However, there are websites that have not developed such APIs. To access data from such sites, we use web scraping.

Suppose you’re looking for a job as a Java Programmer in Washington DC. It means that you’ll have to invest a lot of time to look for the job. Searching for a job manually is boring and time-consuming.

To make the process easier and save time, you can automate it by creating a web scraper using Jsoup. The work of the web scraper will be to scrape data about jobs from job listing websites of your choice and store it in a database such as GridDB.

Web scraping can speed up the data collection process and save you time. In this article, I will be showing you how to scrape data from websites using Jsoup in Java and store the data in GridDB.

Jsoup is a Java library that is made up of methods for extracting and manipulating HTML document content. Jsoup is open source and it was developed by Jonathan Hedley in 2009. If you are good in jQuery, then working with Jsoup should be a walk in the park for you. This is what you can do with Jsoup:

How to Add Jsoup to your Project

Step 1: Right click the project name on the Project Explorer and choose “Properties..” from the menu that pops up.

Step 2: Do the following on the Properties dialog:

However, it’s possible to use the Jsoup library directly from the terminal of your operating system as you will see later in this article.

We should first import all the libraries that will be needed in the project. This is shown below:

Next, I will be showing you how to fetch content from a web page using Jsoup.

How to Fetch the Page

To work with the DOM, you should have a parsable document markup. Jsoup uses the org.jsoup.nodes.Document object to represent web pages.

The first step towards fetching a web page is establishing a connection to the resource. Next, you should call the get() function to retrieve the contents of the web page.

In this article, we will be scraping the Java sub-reddit on the following url:

Let us fetch the page:

Some websites don’t allow crawling using unknown user agents. To prevent the web scraper from being blocked, let us use the Mozilla user agent:

We have created a Document container and given it the name subreddit to store the HTML contents of the web page.

If you print out the contents of subreddit container, you should get the HTML contents of the web page, that is, the Java sub-reddit. Simply run the following command:

In our case, we are only interested in fetching the titles of posts and the time each post was created. We will use HTML tags for this. All titles have been stored within an <h3> tag and given a class name as shown below: 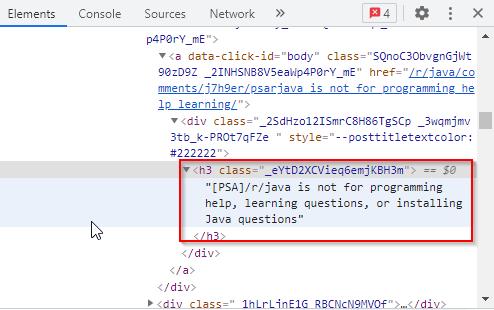 The times the posts were created have been stored within an <a> tag and given a class name as shown below: 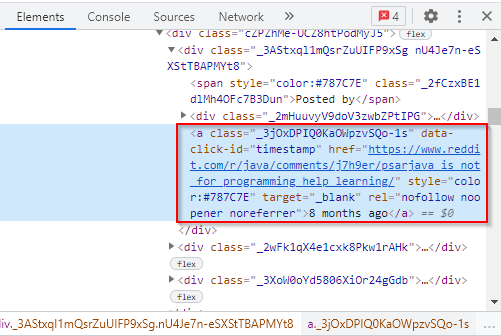 We will use the above HTML tags to scrape the title posts and the times they were created from the website. The following is the Java code for scraping the titles:

We have created an element named titles in which all the titles will be stored. We have then created a for loop to iterate over all the items stored in the element and print them out. This will help us to access individual titles of posts.

The following is the Java code for scraping the times the posts were created:

We have created an element named times to store all the times extracted from the site. A for loop has then been used to iterate over the items stored in the element and print them out.

Let us put the code together by nesting the for loops and surround it by a try and catch block to catch any exceptions that may be thrown when scraping the website. This is shown below:

If you run the code at this point, you should see the text that has been scraped from the site, including post titles and the times they were created.

Now that we’ve managed to successfully scrape data from the site, it’s time to store it in GridDB.

First, let’s create the container schema as a static class:

The above class represents a container in our cluster. You can see it as a SQL table.

To establish a connection to GridDB, we’ve to create a Properties instance using the particulars of our GridDB installation, including the name of the cluster to connect to, the name of the user who needs to connect, and the password for that user. The following code demonstrates this:

For us to start running queries, we have to get the respective container. Remember that we created a container named Post. Let us get it:

We have created an instance of the container and given it the name coll. This is what we will be using to refer to the container.

Next, let us create indexes for each of the two columns of the container:

Note that we’ve also set autocommit to false. This means that we will have to commit changes manually.

Next, we will create an instance of our container, that is, Post and use that instance to prepare and insert data into the container. This is shown below:

We have also committed the changes made to the database, hence, they cannot be undone.

First, login as the gsadm user. Move your java file and the .jar file for Jsoup to the bin folder of your GridDB located in the following path:

Next, run the following command on your Linux terminal to set the path for the gridstore.jar file:

Next, navigate to the above directory and run the following command to compile your WebScraping.java file:

Run the .class file that is generated by running the following command:

That’s how to scrape data from a website using Jsoup in Java and insert data into GridDB.