Fixstars recently performed benchmarks that compared time series databases GridDB and InfluxDB using one AWS instance with a CentOS 6.9 image. The tests were done using YCSB-TS framework, a fork of YCSB benchmarking tool meant for testing Time Series databases. The tests were ran with two datasets: one which could be held primarily in-memory (100M records) and one that would require performing disk I/O (400M records).

It is also important to note that on average GridDB used less CPU resources than InfluxDB while still managing to provide higher throughput and lower latencies in query (read and scan queries) operations.

The read phase of our testing on YCSB-TS performed a series of read queries that would search for rows with a specific TIMESTAMP key. These timestamp keys would be generated by YCSB-TS. 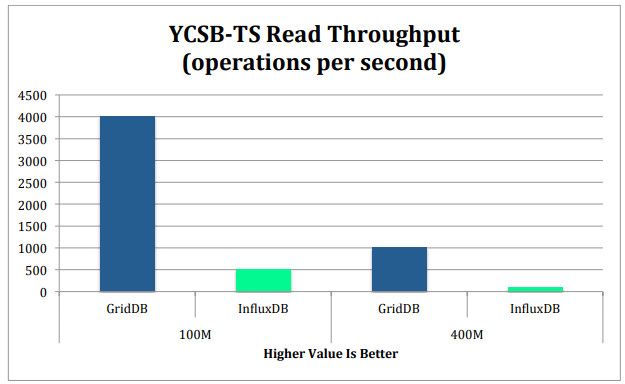 The scan workload would perform a series of general Scan queries or aggregation queries such as AVERAGE, SUM, and COUNT. All scan operations would use a random time-range generated by YCSB-TS.

A single C4.2xLarge AWS instance was used to run both YCSB-TS and the database that was being tested. Benchmarks began by loading a database of either 100 or 400 million 50 byte records into both GridDB and InfluxDB. Once the load phase completed, YCSB-TS would perform a series of read or scan operations. The data would be distributed amongst 8 containers using 128 threads.