Economic indicators have been used in numerous studies to forecast stock prices using well-known statistical methods. The rising power of computers since *2010 has resulted in the development of new methods of machine learning. To discover whether those algorithms can predict the stock market using a variety of mathematical and statistical methods would be interesting. The purpose of this article is to model the monthly price of the S&P 500 index based on U.S. economic indicators using GridDB to extract the data, followed by performing the statistical tests and finally building the machine learning model.

The outline of the tutorial is as follows:

This tutorial is carried out in Anaconda Navigator (Python version – 3.8.3) on Windows Operating System. The following packages need to be installed before you continue with the tutorial –

While loading the dataset, this tutorial will cover two methods – Using GridDB as well as Using Pandas. To access GridDB using Python, the following packages also need to be installed beforehand:

5) FEDFUNDS – Federal Funds Effective Rate (The federal funds rate is the interest rate at which depository institutions trade federal funds with each other overnight.) (Units: Percent)

The dataset is available publicly and can be downloaded from finance.yahoo.com and fred.stlouisfed.org website. The obtained data were combined into one data set, which was checked for missing values.

Let’s proceed and load the dataset into our notebook.

Toshiba GridDB™ is a highly scalable NoSQL database best suited for IoT and Big Data. The foundation of GridDB’s principles is based upon offering a versatile data store that is optimized for IoT, provides high scalability, tuned for high performance, and ensures high reliability.

To store large amounts of data, a CSV file can be cumbersome. GridDB serves as a perfect alternative as it in open-source and a highly scalable database. GridDB is a scalable, in-memory, No SQL database which makes it easier for you to store large amounts of data. If you are new to GridDB, a tutorial on reading and writing to GridDB can be useful.

Assuming that you have already set up your database, we will now write the SQL query in python to load our dataset.

Note that the cont variable has the container information where our data is stored. Replace the credit_card_dataset with the name of your container. More info can be found in this tutorial reading and writing to GridDB.

When it comes to IoT and Big Data use cases, GridDB clearly stands out among other databases in the Relational and NoSQL space. Overall, GridDB offers multiple reliability features for mission-critical applications that require high availability and data retention.

We can also use Pandas’ read_csv function to load our data. Both of the above methods will lead to the same output as the data is loaded in the form of a pandas dataframe using either of the methods.

Once the dataset is loaded, let us now explore the dataset. We’ll print the first 10 rows of this dataset using head() function.

After, we checked whether the independent variables correlated with each other using the VIF test. Finally, because the indicators are measured in different scales, the data were normalized using z score criteria to produce accurate and reliable mode

If we take 5% as the confidence level in our hypothesis of Dickey Fuller test, we can see that pvalue is much greater than 0.05 so the S&P 500 is not stationary.

To make the data stationary, it was necessary to create a new dependent variable, which was calculated from the current monthly price minus the previous month’s price. In this case, the tests mentioned earlier were recalculated and the data were found to be stationary since pvalue comes out to be 0.

The next step is to find if independent variables did not correlate with each other. The VIF test was chosen for this purpose. Variance Inflating factor (VIF) is used to test the presence of multicollinearity in a regression model.

From the table it can be seen that the VIF test values for each variable are well above 10. In this case, the indicator with the highest VIF value is removed and the whole set is recalculated. This is done as long as all variables with values less than 10 remain.

We found that 11 of them did not meet the linear regression rule that the data should be linear.

The last thing in our second stage was to take those 3 indicators together with S&P 500 index price data and normalized them by z score criteria.

Now, let’s proceed to building and evaluating machine learning models on our credit card dataset. We’ll first create features and labels for our model and split them into train and test samples. Test size has been kept as 20% of the total dataset size.

We started the third stage of the study by constructing a statistical linear regression model, which is our baseline.

Currency in Circulation has the highest coefficient which means highest impact to model.

After the model has been fit on our training data, we can proceed to predicting for our test set in order to evaluate the model performance. Lets store our predictions in predicted.

Evaluation Metric: 1) Coefficient of determination (R^2). This is the most important indicator of model confidence in the data, which is mandatory in all descriptions of regression models.

Random forest regression is a tree ensemble learning technique. Prediction based on the trees is more accurate because it takes into account many predictions. This is because of the average value used. These algorithms are more stable because any changes in dataset can impact one tree but not the forest of trees. 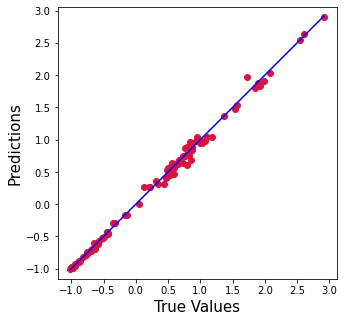 The ML Random Forest model was found to be the better machine learning model because it provided highest R2 and lowest error rate. The statistical linear regression model was improved by 6 % and the error rate was reduced 20 times.

In this tutorial we identified 13 indicators that can have the most significant impact on stock markets and S&P 500 index in particular. We examined two ways to import our data, ussing (1) GridDB and (2) Pandas. For large datasets, GridDB provides an excellent alternative to import data in your notebook as it is open-source and highly scalable. Download GridDB today!